R.Tristan Banks
Level/Game Design, the study of games, and game culture take up most of my time. I love to figure out ways to make levels tell a story by the placement of an off-center painting, a pile of rubble, or the color of a light. I've been modding with the UDK/Unreal III and the T3D engine. I'm totally at home with using level editors, Unreal Matinee, Kismet, Particle Editors, and the Unreal Material Editor. 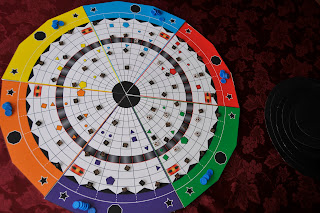 
During our mad rush to get this game playable, we went through roughly twenty test sessions and over forty different variations on the rules of the game. This dash to get the game done forced us to throw out design decisions that would have made us go over our time limit (like trying to balance stealth mode and hijacking resources from other players), and instead made us concentrate on just the core mechanics of the game and how to make it fun.

In many ways, it felt like we were trying to make Star Fox and instead made Asteroids, but we were accepting of that because of the generally good praise we received over the game.
Close up of Pieces 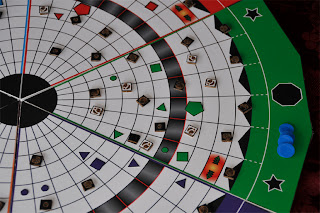 When we first started making Black Hole, we knew that we needed to several different kinds of ships for the Players to use so that the game wouldn’t be boring, as well as add more layers of depth to the game.  These ships are represented by different shapes.

The circles on the board represent Scouts class ships, the fastest ships in the game. These are the weakest ships in the game (only one point of armor), but they are essential to quickly finding out how much ore the asteroids (the black and white square pieces) contain. Scouts are able to spend their action turn to scan a unmined asteroid. Once scanned, everyone knows what that asteroid is worth.

The triangles represent Destroyer class ships. These ships serve no other purpose then to blow the crap out of your enemies. These ships are able to move up to three spaces a turn, they can sacrifice their action phase to move one extra space, or they can sacrifice their movement phase and shoot twice. Destroys have two points of armor.
The pentagons represent the Harbinger class ships. These ships are the slowest in the game (can only move two spaces a turn) but can shoot twice each turn from up to three spaces away from their target, destroy asteroids, and takes five hits to take down. They are also the most expensive ship in the game to buy.

The squares represent the Mining Crafts. These ships move at three squares a turn and are the only ships that can mine and collect ore from the asteroids. These ships take three hits to be destroyed.
When Players use their Mining Crafts to collect ore, they must bring the ore back to their base. These bases are located at the the edge of the board. Each Player can bring ore to their base only, unless the Players are playing co-op rules. Once the Mining Craft enters the Player's base, the ship must spend the next turn "docked" at the base before the Player can collect the ore.

Asteroids
Asteroids contain Ore, which is the currency and point system of the Black Hole. Before a Scout scans the asteroid or a Mining Craft mines it, the Asteroid Piece is white with the image of an asteroid on it. Once it is scanned or mined, the Player flips the Asteroid Piece over to reveal a black background with what kind of asteroid it is.
There are three kinds of Asteroids:
1. Large Asteroid = 3 pieces or ore
2. Small Asteroid = 2 pieces of ore
3. Broken Asteroid = 1 piece of ore
After the Asteroid is mined, the piece is removed from the board and replaced with a Mined Asteroid Piece.
At the end each round (after all Players have had their turn), the asteroids move 2 units towards the center of the board in a straight line. If a Player's ship happens to be in the way of the Asteroid, that ship is pushed closer to the center of the board and receives 2 points of damage. 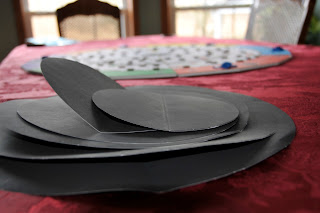 End Game
Once the largest Black Hole Circle is put down, the game ends. At this point, the Players count how many pieces of Ore that they have as well as the total ore worth of their ships. The Player with the highest score, wins.
Posted by R.Tristan Banks at 12:19 AM